Should I Repair Or Replace My Boiler?

Should I repair or replace my boiler

It is a common question that our engineers get asked 3 or 4 times every single day! 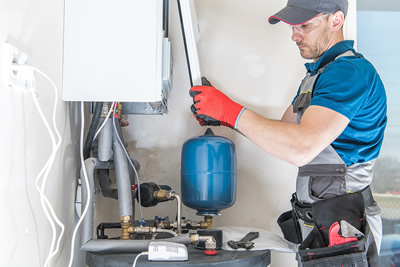 Unfortunately, the plumbing and heating industry is a magnet for dishonest sales and tradespeople trying to make a quick buck without considering what is best for their customers in the long term. Unsurprisingly because of this, the UK has one of the highest replacement rates of boilers, with one of the shortest life expectancies for new boiler installations in Europe.

Don’t get us wrong; there are certainly times when replacing your boiler is a better option than repairing it, but not as often as other heating companies would have you believe.

Below we will run through a few of the primary considerations we advise our customers to consider before deciding to repair or replace their boiler.

The main things to consider when debating whether to repair or replace your boiler are:

How long should a boiler last?

As a general rule of thumb, if your boiler is 15 – 20+ years old, then it’s probably time to consider a replacement. 15-20 years is the lifetime of a well-installed and adequately maintained boiler.

If your boiler is 10 -14 years old, then the boiler is reparable. Depending on the condition and the quality of the installation, it might be time to start planning for a replacement. Still, parts will undoubtedly be readily available, and you should not let any pushy salesperson scare you into replacing a boiler when you do not want to.

If your boiler is less than 10 years old, you should not be considering replacing it, nor should an honest engineer or heating company advise you to replace it.

The only exception to this is if the installation was so bad that the boiler is considered to be dangerous. Or, the heating system has never been cleaned, leaving the boiler in such lousy condition that repairing it will cost almost as much as replacing it then, and only then should you even consider replacing a boiler less than 10 years old. Thankfully in our experience, installations this terrible are very uncommon.

When should I replace my boiler?

As mentioned above, the condition of your current boiler is a crucial factor to consider when deciding whether to repair or replace your boiler.

It’s not just the initial cost of the boiler repair; it’s also the possibility of future boiler repairs and the disruption these can cause to your life.

If your boiler is installed correctly, adequately maintained, and serviced annually, you shouldn’t have too much trouble. A Which? study found that on average, only 18% of boilers breakdown each year, and only 3% of homeowners would save money from having boiler insurance cover from providers like BG, meaning the odds are overwhelmingly in your favour.

If the boiler breaks down 2 or 3 times a year, you might consider insurance cover or a replacement boiler. Still, if your boiler is breaking down, there is almost certainly an underlying problem that will need to be addressed before replacing the boiler; otherwise, the same issues will persist with a shinier box on the wall.

Should I upgrade my heating system?

The heating system is something that sadly gets grossly overlooked and neglected in most UK homes. From the initial installation to annual maintenance to the new installation, people seldom take any time to consider the impact of the HEATING SYSTEM.

If you think of your boiler as a car, the heating system would be the road network. Anyone who has lived, worked, or visited central London would have at some stage seen a rusty old van in a traffic jam with a £250,000 Ferrari stuck behind it. The point is it doesn’t matter how technically sound the Ferrari is; if it isn’t in the environment it was built for, then it’s no better suited than anything else.

The same can be said for your boiler. Most heating systems in the UK were installed in the 70s & 80s, and very little, if any, consideration would have been given to things like flow rates and energy efficiency, so simply replacing the boiler will probably mean you won’t fully benefit from the potential energy savings. In addition, as the boiler is trying to work in an environment it wasn’t designed for, you’ll likely experience the same issues as previously.

Put simply, unless you’re at least willing to consider upgrading the heating system, you could end up with an expensive Ferrari stuck behind a rusty old van.

How much should a boiler repair cost?

The price of a boiler repair will vary depending on many things, including what is wrong with the boiler or heating system, where you live, what time and what day you want your boiler repaired, whether you use a sole trader or a larger company and the skill of the engineer or how long the engineer takes.

On average, boiler repairs in London will range from £250 – £450. However, if the primary heat exchanger needs replacing, it can cost £1500 for the materials and labour depending on what type of boiler you have.

If the repair costs more than £1000, you might want to consider replacing the boiler instead. Still, a new boiler will likely cost about £3000 from a good company who do the installation correctly, so you need to consider how reliable has the boiler been in the past, can you afford to replace the boiler, and if you get a cheap boiler installation will you be in the same situation in a few years?

How much should a new boiler cost?

Like the cost of a boiler repair, a new boiler installation price will vary depending on where you live and what type of boiler you want. The condition and age of the heating system will also affect the final price.

There are many cheap ‘boiler slingers’ available nowadays to ‘chuck a boiler on the wall’ for a relatively low price, but this is the exact reason we have such a dreadful waste mentality for new boiler installations in the UK, and probably a contributing factor to why you’re reading this article now.

The truth is a gas boiler is not just another kitchen appliance, it’s a highly technical, finely engineered piece of plant, and it needs to be installed as such.

A proper boiler installation with a complete system clean, upgraded controls, and possible system alterations will cost anything from £3-5000 and up to £10,000 if you’re changing the cylinder and having the whole system upgraded.

How efficient is my old boiler VS The energy savings of a new boiler installation?

As mentioned a few times already, the boiler is only one part of the consideration when talking about efficiency.

The efficiency ratings advertised by manufacturers are often measured in perfect conditions on new heating systems in well-insulated houses using modern controls. Unfortunately, the reality is often far from this. As a result, most condensing boilers operate at 10-25% below their potential.

It doesn’t stop there because the boiler you’re considering replacing is likely to be an older D-rated non-condensing boiler. As a result, it will probably be better suited to an old dirty system than the modern A-rated condensing boiler, and the actual energy savings will be marginal at best.

Unfortunately, the only way to fully benefit from the massive potential a new boiler offers is to put it in the environment it was meant for and also upgrade your controls to weather or load compensation, thoroughly flush your heating system and potentially upgrade some radiators and pipework otherwise you could end up with an expensive Ferrari stuck behind a rusty old van.

Is it more economical to repair or replace my boiler?

As we’ve already discovered, simply replacing the boiler doesn’t equate to guaranteed energy savings, but with an extended guarantee, is it more economical?

Well, in short, no. The process of installing a new boiler has a significant impact on both the environment and your finances, from the manufacture to transport to the actual installation, every part of the installation process produces vast amounts of CO, and we already understand that to install a new boiler properly will cost anything from £3000 – 5000.

Compare this to a boiler repair with no need to transport and manufacture a new appliance; parts can be refurbished, environmentally, and economically friendly. In addition, many boiler repairs will not even need parts to be replaced.

It’s also worth considering that unless you’re going to go the full mile and get the boiler appropriately installed, it’s very likely that when you do need to use your manufacturer warranty, it could well be void if the installation doesn’t meet the manufacturer’s requirements which will mean you’re stuck with a relatively expensive, inefficient, poorly installed boiler with no warranty that will be just as unreliable as the one you’ve got rid of.

Will you be moving home in the next 10 years?

A significant reason for people deciding to replace their boiler as a pose to repairing the boiler is the extended guarantee that most manufacturers offer, but if there’s a chance that you could be selling up and moving in the next ten years, is it worth spending up to £5000 on a new boiler?

It’s also worth noting that the guarantee is often for the customer, not the property, so if you sell with 5 years of the guarantee left, it won’t always be allowed to be transferred to the new owner.